There are many reasons why crystals break. The most common one is that were dropped. While it may seem like they are indestructible, the truth is that even the strongest crystals can be broken if they are not handled with care.

However, sometimes despite caring for our crystals really well, they still break on their own. In a metaphysical context, this happens because of a number of factors, including having been in your possession for too long where they have absorbed energy up to their breaking point.

In this blog post, we will explore some of the most common reasons why crystals break, and how you can prevent this from happening, and also understand that it’s sometimes unavoidable.

Now let’s take a look at some of the reasons why your crystals break.

Some Crystals are Fragile

One of the main reasons why crystals break is because they are brittle. They can be easily fractured when subjected to stress, but they do not deform much in shape before they break. Some crystals are a lot more fragile than others, but even the strongest crystals can be damaged by being mishandled.

For example, when you drop a crystal, it can easily get broken. This is because of its fragility, which is why it is important to keep your crystals away from sharp objects.

Even though crystals are strong, they cannot withstand all kinds of damage. Therefore, you need to treat them carefully to prevent a broken crystal.

Breakage Due to Overexposure to Moisture

Moisture has a way of weakening crystals over time. If you expose them to moisture, then they will begin to weaken. For instance, if you leave your crystals outside during rainstorms, then they will start to break.

This is because water molecules can penetrate the surface of the crystal. As they enter the crystal, they can cause crystals to swell and eventually crack or shatter.

This problem becomes worse if your crystals are left outside for long periods of time. So if you are thinking of keeping your crystals intact for as long as possible, then you should keep them inside, in a dry place. But note that there are also crystals that may break from overdriness such as opal.

Breakage by External Forces and Stresses

External forces such as extreme temperatures, rapid temperature changes (especially for feldspars) and pressure can also cause crystals to break. For example, if you put your crystals in direct sunlight, then they will become weak.

When exposed to heat, the crystal will expand and contract. When it contracts, it will try to return back to its original position. However, when it expands, it will try to maintain its new size.

If the expansion and contraction exceeds the strength of the crystal, then it will start cracking due to the laws of physics. The same thing happens when you put your crystals under high pressures.

If you want to prevent your crystals from breaking, then you should avoid exposing them to these types of stresses.

Breakage Due to Flaws Within the Crystal

Another reason why crystals break is due to flaws within the crystal itself that have been introduced during the growth process. These flaws can include cracks, inclusions, and other imperfections.

The most common flaw found in crystals is called a cleavage plane, where fractures tend to occur. Cleavages are usually parallel to one another and run through the entire length of the crystal.

As a result, the crystal breaks along this plane. You can actually see this type of fracture by looking closely at the surface of the crystal with a magnifying glass.

They can be really beautiful and form a really unique and beautiful crystal piece, but they can also make the crystal weaker than it would normally be.

For instance, if you have a large inclusion in your crystal, then it could act like a stress raiser. This means that the inclusion is causing the whole crystal to bend or distort.

If this occurs, then the crystal may not be able to withstand external forces. It may even crack.

Your Crystals Have Fulfilled Its Purpose

Now we are looking at a more ethereal reason why your crystals break. Once your crystals have fulfilled their purpose, then you need to let go of them. Breaking is a sign that they have reached this stage. Once they are no longer useful, then you should return them back to nature by burying them in the earth.

Sometimes it may be hard to do just that, as it could be your favorite crystal. You may not need it around anymore but you might find yourself getting attached to them. It’s ok if you’re not ready to let go yet. This process doesn’t need to be rushed, and you will find that one day you’ll be able to part with it.

This attachment can lead to frustration and disappointment when you realize that they are no longer useful for what you intended.

What Does It Mean When My Crystal Cracks or Breaks?

If you crystal was mishandled, then it just means that it broke due to the physical stress that was placed on it. However, if it broke on its own, then it could mean these few things.

Your Crystal Has Finished Serving Its Purpose for You

If your crystal has finished serving its purpose for you, then it could mean that it’s time for you to find something else. Although some people keep their crystals forever, others get rid of them as a means of letting go once it has fulfilled its purpose.

This does not mean that you cannot still use them as decoration. Just know that they won’t really help you as much as it did before.

Your Crystal Has Absorbed External Energy Till Its Limits

Another possibility is that your crystal absorbed bad energy from you or others. If you were using your crystal to heal yourself, then it could absorb all of your negative energy to help you get through your circumstances.

After a while, the crystal will begin to feel heavy and tired and the crystal energy starts to diminish. At this point, it could show you that it has done all it can by breaking itself.

Your Vibration is Too High for the Crystal

A third possible explanation is that your vibration is too high for the crystal. One example is that if you are constantly thinking about money, then you could be affecting your crystals negatively.

When you think about money, you could be sending out vibrations that affect other crystals. These vibrations could weaken your crystals so that they eventually break.

The same thing goes for any thoughts that you have that are excessive or powerful in nature.

Crystals That Tend to Break Easily

The hardness or softness of a crystal does not determine its ability to withstand breakage, but it only measures the ability to withstand scratches and water penetration. Hardness can be categorized using the Mohs Scale of Mineral Hardness where we briefly talked about in this blog post here.

The structure of crystals are usually the biggest factor in determining if they are brittle or easily cracked. Some crystals are more prone than others to form cleavages, which in turns, cause them to fracture easily.

Here are some common crystals that are known to be on the fragile side:

Can I Glue My Broken Crystals Back Together?

Yes you can definitely glue your crystals back together using epoxy, crystal glue, glass glue or even super glue. But understand that they are no longer considered as one single crystal as they have been artificially put together. They have broken apart from a structural level, and glueing them back together does not bond them back the same way.

However, there’s nothing wrong with glueing them back for aesthetic reasons. It just doesn’t work like it used to when they were joined together naturally.

What to Do If I Break My Crystals?

The first thing will be to thank your crystal for helping you during times of need, by just saying a simple “thank you” to it. You can also be more specific in letting the crystal know how it has helped you before.

Once you’ve thanked your crystal, you should try to figure out why it broke. Was it because it was absorbing too much energy? Or was it because you were overusing it? Or perhaps it was just out of carelessness where you dropped it?

This allows you to understand what made your crystals break at the first place.

You should also make sure that you don’t try to associate this as a negative event. Instead, allow yourself to appreciate what the crystal has done for you, and return it back to the earth by burying it in soil if it no longer serves any purpose for you. There’s a lot of debate on which hand to wear your crystal bracelet. Some say the left hand is for receiving energy and the right hand is for giving energy. Others say it doesn’t matter, as long as you feel the bracelet energy. I like to think that it depends on the type of crystal… 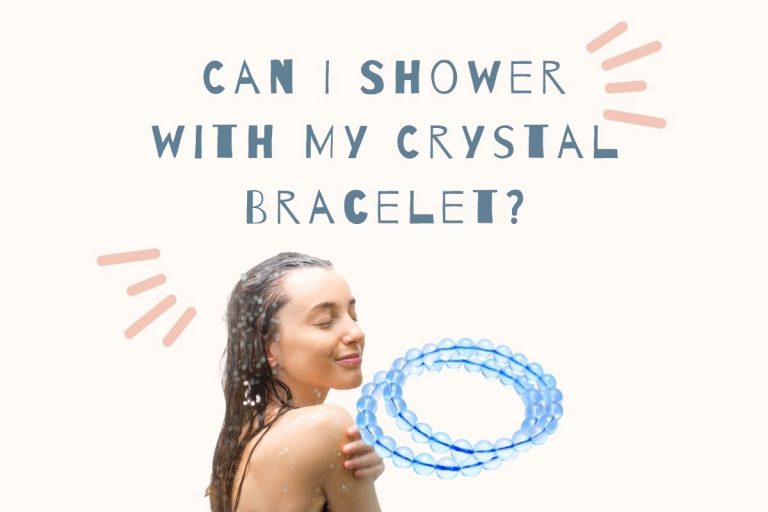 Many people are curious about whether or not it is okay to shower with their crystal bracelets on, be it out of convenience, or just not wanting to part with our crystals. There are a few things you should keep in mind in order to ensure that your bracelet stays in good condition. In this… Stress is a natural part of life and it’s important to take care of yourself when you feel overwhelmed by the pressure of daily tasks. But sometimes stress can be too much, especially if your job or relationship requires constant effort. Are you stressed out at work or home? Is stress affecting your health? If… Crystal bracelets are beautiful jewelry pieces that are often worn during the day. They are a popular choice for those who want to add a touch of elegance to their wardrobe. Apart from helping you to express yourself and your personality, crystal bracelets also have energies that can heal, protect, being good luck or even… The world is an unpredictable and chaotic place. Everyday takes us away from ourselves and into a situation that we’re not sure about or we’ve never experienced. We could be meeting with a stranger, making a new friend, taking on new responsibilities, or going through something for the first time that feels overwhelming. These are… Why Should You Cleanse Your Crystal Bracelet? Crystals are made of small points or clusters of mineral matter and can be found all over the world. Crystals have a unique frequency, or vibration, which is determined by a number of factors including the size and shape. It is believed that crystals emit positive and negative…